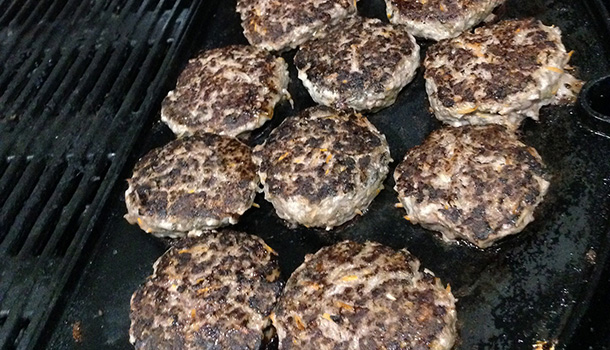 It was the a 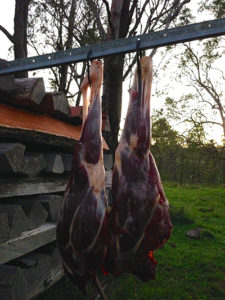 fternoon before Australia day and Melissa and I had gone bush. We had set up camp up in the hills of our friend’s cattle property at the head waters of the Brisbane River. Thanks to some recent rain the hills were covered in a blanket of green grass.

We had the camp fire going and stocked up with a pile of dry Ironbark at noon. Allowing ourselves plenty of time for the wood to burn down to create a bed of coals to cook tonight’s camp oven dinner.

Once all the preparation was completed around camp I laced my boots on, grabbed my rifle and took to the hills for a hunt in search of a red deer that I could turn into fresh cuts of venison.

After an hour of hunting along a ridge with ironbark trees as my cover, I spotted a mob of deer. I picked out a young doe and had a shot. She went straight down and on closer inspection I had secured a doe that was 12 months old.

I got to work butchering the deer taking off the front and back legs then the back straps or fillets. The meat was placed into garbage bags to keep it clean, then loaded into my backpack and started the walk back to camp.

All the meat was skinned and left to hang in the night air to cool. The next morning we got out of bed before day l 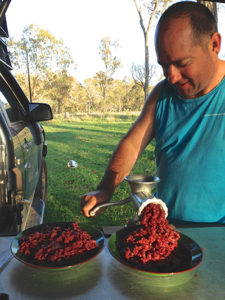 ight so that we beat the heat and flies. The legs where cut down into individual pieces such as rumps, rounds and silversides.

The off cuts of venison were put through a hand mincer to produce a small amount of fresh mince.   As soon as we arrived home I made some rissoles with the mince and cooked them on the BBQ. It was a very pleasing way to finish our Australia day break.